While we were waiting for our game to start at Maximum Escape’s reception area, their promotional videos played on a screen. We were laughing at how epic and exaggerated the trailer to The Dungeon – The Last Round seemed to be: everything had a dramatic flair, similar to the images you see in this post. Once the game started, however, we bit our tongues: the place was super-epic and lived up to  the trailer! It was an amazing recreation of a medieval dungeon, with torture tools (safely locked to the walls), lots of wood, stone and narrow dark corridors to explore. 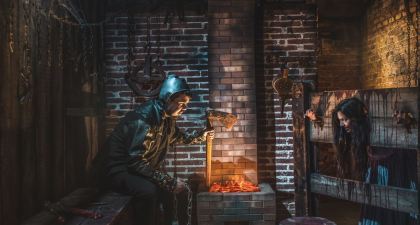 We were impressed by everything about the setting, but there was little time to spare. In this game, players are prisoners bound to be beheaded at any moment. It is not about locks, puzzles or jigsaws. The Dungeon is a pure escape game: it is your instinct and your raw will to escape that will get you out of there, finding your way through the dungeon maze. Maybe you can get some help from those less fortunate than you…

We started the game divided in two cells: girls to one side, guys to the other. We could barely see the inside of our own cell, who knows what was happening on the other side. Trapspringer tried to communicate with us when a ruckus started – a very surprising thing happened right in the beginning of the game and us girls could not avoid yelling our lungs out!

The Dungeon (named La Mazmorra: La Última Partida in Spanish) is a very physical game. It does not require lots of strength, but most tasks are about dexterity, positioning and exploring. From the start, firm hands and teamwork were essential to get us out of our cells after the tension calmed down. The first half of this room involved a number of tasks to do with the physical aspects of escaping captivity, while the more puzzle-like activities emerged later on.

A bit of exploration also showed us we only had one old lamp to light our way along the tunnels. Occasionally, we had to split up and choose someone in the group to bravely venture through some areas in the dark.

The puzzles is this room are few and not complicated, mostly a combination of logical deduction, a little association, but most of the key set pieces were mechanical in nature. There was only one puzzle towards the end which we thought was slightly hard as it relied on elements too subtle for us – it turned out that this particular puzzle could also be bypassed. The difficulty resides in exploring the enormous area. Prepare yourself to do a lot of (meaningful) search, check every wall, and pay attention if encounter any of the ghosts who will communicate with you. These souls, prisoners who perished in the dungeon, may appear to help you escape. They just… appear… and sometimes in spectacular fashion.  It may cause some jump scares if you are caught unexpectedly by their arrival, but the room in general is not scary at all.

The game is completely linear and Maximum Escape does well in restricting it to groups up to four people. We certainly recommend four as the optimum group size. The way the dungeon was built was beautiful, and there are very interesting examples of craftsmanship inserted in the game. It certainly was the first time we played a dungeon themed game in an actual bricks and mortar underground prison-like place. There were also events which were quite epic for an escape room. It certainly had the feel of a theme park ride.

When we played The Dungeon in April this year, the venue was still a branch of the Russian franchise Claustrophobia. In May, Maximum Escape became an independent company and opened two more games. On their website, they said the name changed, but their passion for escape rooms remains the same. If the new games are as good as the The Dungeon, we should definitely think about a new trip to Barcelona to try them in the future!

Service: Our GM greeted and briefed us in English, although Castillian Spanish was her first language. During the game, her hints were well timed and she did not give answers, but nudged us in the right direction.

There were lockers for our belongings and water. Toilet was just beside the reception area.

Communication: You talk to the walls and the gamemaster will reply to you through the sound system. Eventually a ghost may appear to give some hints as well.

Surroundings: The venue is located in the junction of Eixample, the Old City and El Born, so there is plenty to explore just walking around. The venue is also in the vicinity of the ‘Triángulo friki” (Geek Triangle) which has a number of different comic / board games / computer games stores.

Urquinaona subway station is at walking distance, and if you go to the opposite direction, you can reach the Catalan Arc of Triumph, near to the City Park, which deserves a visit as well!

This room has also been reviewed by Dragones & Marmotas (written in Catalan) and Room Escapers (in Castilian).