What happens to toys when we do not play with them anymore? When they are in boxes, waiting to be donated, given to someone else, or worse, forgotten in some attic or garage? Toy Story certainly springs to mind. In Little Playful Things, you and your friends are a group of old toys that refuse to retire (or are not allowed to)! Under the command of stage manager Alfie, a very creepy ventriloquist puppet, you have to organise a performance in the toy shed. Willingly or not, you must show your talents, because this show will determine how you will spend the rest of your toy days!

Although it sounds a bit scary (because old toys have that ‘aura’ around them), Little Playful Things is not a scary room and can be played even for those that dislike frightening themes.

The toy shed is a colourful but slightly messy place. There are boxes and furniture around, pipes on the wall and some old objects – I suppose we can call a typewriter “old” these days, right? (Trapspringer: ‘What are you talking about? They’re antiques these days!’) I had one when I was younger, does it mean I belong in the old stuff box?

The early game will require some dexterity, and that trait will be challenged a few more times along the game. However, the variety of puzzles is commendable: they vary from physical to logical, to sensory and observation. There is not as much association as in other rooms, which is quite uncommon. 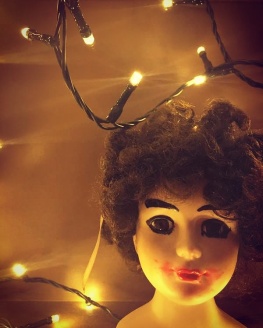 The puzzles are not too difficult, but they are not simple either – while Little Playful Things would probably be a hard room for beginners, it is far from being impossible. We did not score its difficulty higher because the room is very linear and all the puzzles have stickers with numbers: you solve puzzle one, then puzzle two, then three… Knowing what comes next makes it much easier to deduce how to find the answers.

Also, if you have a diverse group, there is a huge chance that at least someone will be good in each of the tasks required. While I solved a logical puzzle, and later the observation one, Trapspringer was focused in a physical task, and our friends solved the sensory puzzle. I admit that I was a complete failure on the sensory puzzle, not being able to spot any differences and even wondering if the props could be “enhanced”… Oh, well, our friends solved so we could go on!

Another thing about the room is that it will be better enjoyed for small to medium groups. Being so linear, members of a large group of 5-6 may see themselves with little or nothing to do at some points. We played with 4 and it was just right. When it got to the time to present our “performance”, it was perfect! We nailed it the first time and Alfie, the puppet, got really happy!

Speaking of Alfie, he is responsible for a quite original hint system. As many other forgotten toys, he has too much time for himself and thinks out loud. Very often, you hear him speaking while you play the room, and his “thoughts out loud” will give you an indication of what to do. Pay attention if you are feeling a bit lost! Game designer and Woodbury owner Aaron explained he got the inspiration for this hint system from videogames, in which characters will often narrate their thoughts to offer the player advice. (“I wonder if this pipe could be important”).

Aaron and his partner Valencia told us Little Playful Things was the first game they designed for Woodbury Escape Rooms, and that they had a pretty good idea of the entire room even before they started building it. The variety of things to do indeed reflect that a lot of planning and dedication was put into that game before launching the company, which started operating in Melbourne just a few months ago.

Little Playful Things also includes a bonus puzzle, and if you solve it, you reduce eight minutes off your final time. We did, so our team finished the room in “29” minutes (instead of the actual 37min) and were awarded Platinum magnet badges! Teams that finish under 40 minutes receive Gold badges from Woodbury, Silver for under 50s and Bronze for finishing without blowing the 60min limit. It is a nice token to take home! 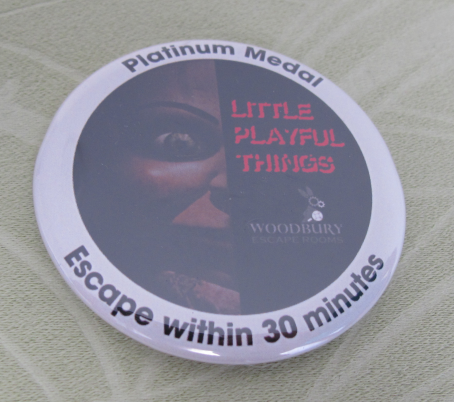 Service: Our gamemaster Laura was a funny lady that made us welcome and quickly sorted payments when we added a last minute member to the game. As we mentioned we had played escape rooms before, briefing was quick.

There is a box for personal belongings and water at the reception.

Communication: You can listen to Alfie thinking out loud, and that may be enough to solve most issues. If you are stuck or need to clarify anything, a walkie-talkie radio is provided to facilitate communications with the gamemaster.

Surroundings: Woodbury Escape Rooms is located in front of a tram stop ion South Melbourne (10-15 min from the city), so we would highly recommend using public transport to get there. There is a large variety of restaurants and cafes around for a pre or post-game meal.